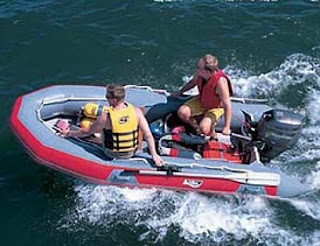 In this article I will try to outline some of the strengths and weakness of the two materials most
commonly used in inflatable boat construction as well as talk about several other materials on the
market. Most of this is based on the time I spent working for one of the largest inflatable boat dealers in the US.

Let’s start with the basics of both materials.
Hypalon- Hypalon is a synthetic rubber made (or made under license) by the Dupont company. Hypalon has been around for more than half a century proving itself to be one of the most durable synthetic rubbers around. Hypalon is actually chlorosulfonated polyethylene meaning it’s a polyethylene with varying amounts of sulfur an chlorine added based on application.
PVC - Is essential a hard plastic converted into a flexible material through additives. PVC is short for poly vinyl chloride. PVC was first discovered in the 1800 but the correct additives to make it into a useful material weren’t developed until the late 1920’s.

Now on to the important parts what that means to those of us who need an inflatable boat.
In this article we will be talking about reinforced or supported fabric boats. Most inflatable boats with
the exception of Sevylor and other extremely low priced semi-toy boats have a layer of supporting fabric sandwiched into their PVC or Hypalon hulls. This fabric creates the extra strength and form holding ability that differentiates a well built inflatable boat from a pool toy. The fabric is rated in either Denier or decitex; Denier is the more common method. Denier is the weight in grams of 9000 meters of single thread of the fabric. (1gram + 1 denier) Decitex is 9/10 Denier (this is the best definition I have found at least.) When you’re looking at inflatable boats you will often see anywhere from 800 to 1200 decitex/ Denier ratings, while these can be useful I wouldn’t go on them being the greatest indication of boat strength. As former co worker with over 20 years inflatable boat experience pointed out these ratings tell you nothing about the quality or density of weave that the thread was put into or the process in which it was bonded to the outer material. This brings us to how the two materials are actually constructed into boats. Hypalon is calendared on to the reinforcing fabric (typically nylon) calendaring is processes where the materials are sent through a series of heated rollers that essential bond the two materials into one. Neoprene is often used as an additional interior layer on hypalon boats to increase their air tightness, this is why hypalon boats are sometime referred to as hypalon/neopreme. PVC is reinforced in the same way, except they typically use PVC for both the outer and inner layer. Hypalon boats are assembled by hand; in fact this is one of their biggest drawbacks. Because Hypalon boats are glued together by hand you will find that two boats of the same model may have small differences (weight for instance is often off by a pound or two) and can even have a slightly different shape when inflated. The hand gluing also lends itself to air leaks over the life of the boat. The hand gluing also reduces the air pressure the tubes can hold. This reduced pressure is of no real concern until you get into air floor models where higher pressures can result in stiffer floors. PVC boats can be constructed with hand gluing methods in much the same way as a hypalon boat, but building in this way doesn’t let you realize PVC’s advantages. PVC can be welded; welding can be done in a number of different ways. The most used method is Thermowelding in which hot air is blasted at the seam as the material is passed through a set of rollers there by melting and bonding the seam together.
There is also a similar method called wedge bonding that uses heated rollers instead of the blast of air.
The other method used primarily by Zodiac is Electro welding. In this process the material is passed
between an anode and a cathode that create a high frequency electric field that again heats and bonds
the seam together. These construction methods allow for PVC’s real advantage- airtight seems and
higher inflation pressures.

Positive and negatives of the materials

Hypalon Pros
-
Strong material very resilient to damage from external objects
-
Very stable in UV light the material may fade but it will typically retain its physical strength longer
than other boatbuilding fabrics.
-
Often backed by a longer warranty due to greater strength and longevity
Hypalon Cons
-
Hand glued seams are more likely to leak air and need mantinece over the life of the boat.
-
Cost because of the labor intensive nature of hand gluing hypalon almost always costs 10-25%
more than PVC
-
Lower air pressure because again of the construction methods Hypalon cannot hold as high
a pressure as PVC this becomes important when a boat uses air keels and air floors as the
additional pressure adds rigidity to these structures.
PVC Pros
-
In expensive, PVC boats because they can be assembled quickly on a production line are often
some of the least expensive inflatables on the market.
-
Higher pressure, because the bonded seems on PVC boats can withstand higher pressures the
air floors and keels can have a more defined shape for better performance (not all companies use
this feature so it’s worth researching Zodiac for instance bakes excellent air floor boats in PVC
while some of their lower priced competitors do not)

Every boat is the same, because they can be built through an automated process PVC boats can
be built to exacting standards (here again be careful as not all manufactures build PVC boats with
standards in mind)
Better air holding, PVC boats usual need less topping off through a season then hypalon boats
because of better air retention properties.
PVC cons

UV degradation, PVC is effected by UV light much quicker than Hypalon. When exposed to a
large amount of UV light PVC breaks down and can become stick, which I can tell you can be
mighty aggravating on a hot summer day

Cheap, this is not true of all PVC boats but because PVC is typically a cheaper material then
Hypalon many bargain basement brands have entered the market with substandard boats often
built by hand gluing PVC not to say there aren’t poorly built hypalon boats, there are just many
more poorly built PVC ones.

What this means to you.

If you’re in the market for an inflatable what material should you choose? While there are many other
factors that can determine which inflatable is right for you when deciding on materials the biggest
question comes down to Price vs. longevity for most people. A hypalon boat will typically outlast a
PVC boat by many years, when I worked at an inflatable dealership when we saw a boat older than
15 years old come in for repair 80% of the time it was a Hypalon boat. After 15 years many of the
PVC boats were no longer repairable. That’s not to say they can’t last longer, I have also seen some
very well taken care of 20 year old PVC boats but these are typically either used on a limited basis
or were covered and regularly treated with 303 protectant. On the other hand if you’re an average
boater and the inflatble won’t be sitting out in the sun for long periods (weeks not hours) a PVC boat
can provide a lot of bang for the buck. Also certain models with desirable features can only be had in
PVC such as Zodiacs H2P air floors which are some of the best performing soft bottom inflatable’s on the market, in fact the other PVC boat that stands out in my mind id the Zodiac Futura which again provides a large performance gain over just about anything (other the certain military zodiacs) made in Hypalon.
So in the end both materials have their positives and draw backs and which you purchase is largely up to your budget and how you use it.