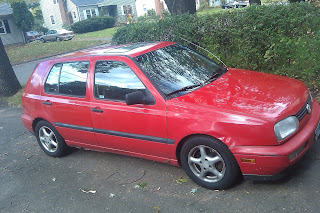 
That’s not to say I never used the membership before (broke key off in a plymouth voyager had my girlfriends car towed due to a mysterious wiring problem) but the VW actually required AAA on 3 separate occasions for a tow. But first lets get into why I put up with this mess.


I bought the car when it was about 15 years old and drove it for about 3 years. Once I got rid of an intermittent skip due due to a bad ground I was in love with the car. It flew around corners and it had that very special VW feel that only VW people seem to understand. Jeremy Clarkson would say it was German and did what a German car should. The 2.0 (2.slow) is an odd little 4 cylinder, it the other 4 cylinders I had driven before this car revving was the answer to your power problems, but in the 2.0 this has little effect running past 4,500 rpm seems to do little to increase your velocity. But this engine does have something that is usually lacking torque. The little 2.0 will drag the car filled with you beer swilling buddies with little effort at 2,500 rpm all day and see perfectly content doing so.


Which brings us to the transmission, my car had the 5 speed which had fairly close ratios and a good feel for an economy car. the issue was that the ratios were really mismatched to the engines torque. Around town they gave you good power but requires quite a bit of shifting to keep the engine happy. The real problem is on the highway, where I was constantly wishing for a 6th gear. The engine would be running around 3,200 rpm at 65 which is just annoying when you have a way to go and are used to running at 70.


The interior space was one of the reasons I bought the car. I’m 6’3″ and found the seat with it;s manual height adjustment to be very comfortable for myself even though the car had a sunroof cutting in on the headroom. I could also throw my son in the back with ease and still have space under the hatch for a weeks worth of groceries. With the seats folded I manged to fit my outboard motor test tank made from a 55 gallon drum inside. The little storage nooks and controls were all well laid out for a car of this era.


Then there is AAA the first issue I had was with the car overheating, This was an interesting problem. The car ended up overheating on the highway on my way home one day piercing the upper engine cooling neck with steam in the process since I had no way to patch it on the highway we have call 1 to AAA. It turns out that this was an issue with how my car was optioned (manual trans A/C power steering. ) when ordered in this way the Water pump is driven off a small belt along with the P/S pump instead of off the main ribbed belt, this belt would then slip in the rain as it was located low on the car and the splash shields had long since gone missing.


2nd tow. Engine starts cutting out on the highway take the next exit and got within about a mile of my house when she stopped dead, well in the rain and 30 something degree weather I decided it would just be easier to get her towed home. After some looking and discussing turns out the coil had a small crack and was shorting out in the rain.


3rd tow was for a failed WP nothing surprising here but still tow number 3 did it in for me.


So while none of these were major problems they did cause me a good deal of stress and made me think twice about VW ownership. I still love the feel of a VW but not the headaches. For the sake of accuracy here is a brief run down off my cars issues


My final thought these are this fun cars as long as you don’t mind doing a fair amount of DIY repairs to your cars.


So there you have it my first car review with luck I will get better as I go.