1990's Albin's why do I like you so much. There just something about the classic but up to date styling, with a good dose of practicality that's just hard to ignore.

The 24 is an oddball in some respects with a relatively few examples (48) made for a 24 footer. It's basically a scaled down version of the 31-34 foot command bridge models Albin built over the years. Having the raised helm area nets you more cabin in the larger boat.  Here it gets the engine under foot instead of in a box in the cockpit, as would normally be the case on a 24 foot boat with a straight shaft inboard.In actuality the straight shaft is one of the more unusual parts of this boat. While the arrangement was common in the pre stern drive era, it was very uncommon by the early 90's. The only other production cabin boat under 26' with an inboard of the time period I can think of is Shamrock (I'm sure there are others but I'm not going to spend all day finding them).
In the cabin you had a large U booth style dinette along with an enclosed head, and small galley. None of which is that strange, but then you get to the cockpit mounted fridge and the sailboat style pilot berth alongside the engine and were back to a very original design. The cockpit is clear at the aft end for fishing with a raised helm seat and fore act bench on the port side, which actually makes the cockpit look a bit like later midcabin sterndrive boats. 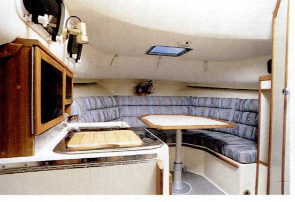